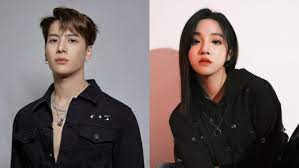 Jackson Wang, a Chinese soloist and rapper within K-pop group GOT7, has debunked any relationship rumours between him and Yuqi, a member of the K-pop female duo (G)I-DLE. Inside a statement published in Mandarin by his firm, RYCE Entertainment, it was said that the paparazzi’s video compilations circulating on social media warped the facts, and this is not uncommon for his friends to congregate at his home. The agency also noted that a police report has been made in order to defend his legal rights.

Independent media “made use of our artist Jackson Wang’s influence and continuously broadcast films that were chopped and pasted together to purposefully misrepresent facts,” according to the statement, which was translated by a fanclub. Words such as “spending the night at,” “roses,” two pretty women’: “sent to Jackson Wang’s home;’ “I shan’t elaborate, you guys can imagine,” were used to maliciously mislead the public and netizens into developing a misunderstanding of Jackson Wang and to attract attention to achieve his ulterior motives. It is common to have gatherings with friends at Jackson Wang’s home and it is nothing out of the ordinary. The actions of this independent media have violated the privacy of Jackson Wang and have also severely violated his reputation.”

“In response, our company has filed a police report. We aim to preserve Jackson Wang’s lawful rights according to the law through the public security bureau and to promote the construction of clean Internet space. We believe that the law is strict and fair, and will not allow violation by lawbreakers who try to push their luck. Once again, we thank everyone for your attention and support of Jackson Wang all along, our company and Jackson Wang will continue to focus on releasing good works and will not disappoint everyone’s love and support! We welcome everyone’s supervision and guidance,” the statement concluded.

Videos emerged online stating that (G)I-Yuqi DLE’s was sighted visiting Jackson’s house sometime in late 2021, as per reports on China’s social networking site Weibo. She was reportedly spotted departing the next day with roses and accompanied by her crew, according to reports. It became a popular subject on Weibo and quickly spread to other social media sites like Twitter.

Also Read: How many fans does the kpop group Solia have?