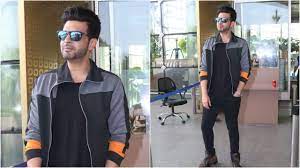 Karan Kundrra is a well-known television personality. He has earned a large following after his appearance on Bigg Boss 15 when he finished as the second runner-up and met his life partner, Tejasswi Prakash. Currently, the actor is frequently in the news for his adorable and romantic moments with his girlfriend Tejasswi, who is currently the star of the mega-popular television drama Naagin 6. We recently encountered Karan at the airport, and he appeared to be in good health!

Karan drew a lot of attention in the photos because of his unusual style and odd appearance. His edgy appearance was perfect for him. He donned a bright yellow top with slouchy blue slacks for an airport-style that was fantastic! His ensemble was completed by his really trendy jacket. His multicoloured, striped jacket added to the intrigue of his appearance. Furthermore, his shoes complemented the multicoloured colours of his clothing. In a nutshell, Karan was dashing. He also gave the photographers a thumbs up while posing for them. Take Sir Karan’s fashion advice, boys!

Meanwhile, when it comes to Karan and Tejasswi, the couple frequently posts adorable stuff on Instagram. Tejasswi had just released a video on Tuesday in which she was seen standing close to her beau Karan Kundrra. On a popular Instagram fad, she lip-synced. She says, “B** come and go bro but you know I stay.” Karan Kundrra commented on the post, “Oh I know baby.. I know”.