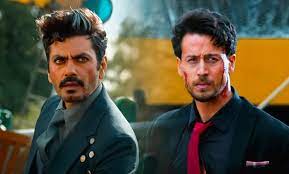 Tiger Shroff’s film Heropanti 2 is the first Indian film to look at frauds, criminality, and heists in the internet age.

Where to watch: Movie Theatres near you

Heropanti 2 is worth watching only on the big screen because of the everyday cybercrime tale, stylish action, and superb cinematic experience with A R Rahman’s soundtrack.

Story of the movie:

Tiger Shroff (Babloo Ranawat) is a hacker with a lot of ambition. When he deceives people online with his cyber crimes, he doesn’t give a damn about the repercussions. He is over heels in love with Tara Sutaria (Inaaya), the sister of worldwide digital fraudster Nawazuddin (Laila). Nawazuddin Siddiqui (Laila) is a software genius who creates an app (Pulse) that takes users’ bank information, but he needs someone to assist him to pull off the world’s largest robbery. Working with Laila and helping him carry off the robbery using his app on March 31st, the financial year ending when everyone has bank accounts full of cash comes in handy for Babloo.

The premise of the film is brand new to the public, with producer Sajid Nadiadwala masterfully writing a fresh subject of hacking. Tiger is undeniably talented, not just in dance and motion, but also in acting. Tara and Tiger Shroff are back together after Student Of The Year 2, and their chemistry only adds to the movie’s beauty.

Talking about the performance of Nawazuddin Siddiqui urf Laila, can’t deny the fact that his every on-screen performance is awe-inspiring. The character’s flair and feminine touch urge the crowd to whistle in the theatre. After Jackie Shroff’s first evergreen movie Rangeela, the trio of Mehboob, A R Rahman, and Ahmed Khan is back, as well as the soundtrack is too fantastic.

Heropanti 2 is the very first Indian movie to look at frauds, criminality, and heists in the internet age. This realm has never been explored before, thus the narrative and execution are novel. Despite certain problems, the movie is a total mass entertainer.

On Kiccha Sudeep’s ‘Hindi declaration,’ Ajay Devgn said, “Why do you dub your mother language movies?”