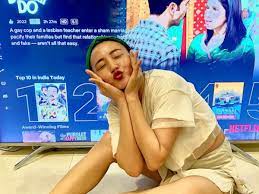 The film ‘Badhaai Do,’ starring Rajkummar Rao and Bhumi Pednekar, was released in theatres on February 11th and is now available to view on Netflix. The film has been promoted as a spiritual successor to the 2018 smash Badhaai Ho, for those who are unaware. Following in the footsteps of its predecessors, Badhaai Do is an uncommon narrative about a lesbian lady and a homosexual guy who marries each other to placate their parents. Chum Darang, who made her Bollywood debut with this film and was much lauded for her performance, also appears in the film.

Chum went to Instagram on Monday to express her thanks and delight over the fact that Badhaai Do is currently trending at number one.

Chum was photographed seated in front of a large TV, which displayed the Netflix India ‘Top 10’ list, with Badhaai Do proudly occupying the top slot. Her joy and pleasure could be seen in the photos as she posed with her contagious smile. She was dressed in a lovely and comfortable outfit. She stated, Along with the photographs “Tell me I am not dreaming. You all ya. We trending number 1! A BIG THANK YOU!!! #badhaaido #netflix #gratitude.” Well, Chum, thank you for such a brilliant performance!

Chum spoke about her role in Badhaai Ho in an interview with ETimes a long back. She replied, when asked about her character, “The character that I am playing, she is such a fun girl and the tag of playing Bhumi’s love interest did not really bother me. It was a challenge to play a role like that but I had no inhibitions.”

Also Read: Bhumi Pednekar on why she chose Badhaai Do- Tap to know