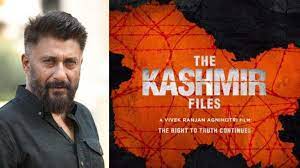 On March 11th, Vivek Ranjan Agnihotri’s film The Kashmir Files will be released in theatres. The announcement was posted on social media by the producers. It is written by Vivek Agnihotri as well as produced by Zee Studios and Tej Narayan Agarwal, Abhishek Agarwal, Pallavi Joshi, and Vivek Ranjan Agnihotri. The movie is said to be based on genuine events. It was originally supposed to be released sooner but had been postponed owing to an increase in COVID instances. It is based on Kashmiri Pandits’ life.

And now it’s been revealed that Vivek has been receiving death threats and requests to stop the distribution of ‘The Kashmir Files’ after a fatwa was issued in his name. “Vivek Agnihotri’s ‘The Kashmir Files’ has been screened 30 times or more in the United States,” a source said. The film will be released in Indian theatres in one month. Vivek Agnihotri had received threats to stop the screening in the United States, but he ignored them. But, all of a sudden, the number of threat calls and texts has grown, with many of the callers threatening to kill him if the film was released in India.”

To note, The Kashmir Files was invited to over 30 power-packed screenings in the United States by various respected institutes and organisations, and garnered an incredible reaction.