Bollywood Society » Which Indian actress has a crush on BTS?
BTS 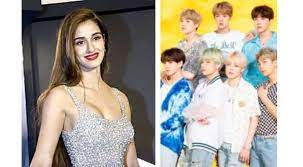 Who nowadays isn’t a huge BTS fan? The Korean pop band has enthralled everyone with their songs, as well as Bollywood actress Disha Patani is on her way to becoming a member of the ARMY, as their people call themselves.

Disha Patani disclosed what BTS song she enjoys that much this weekend, along with a video of the song. ‘ON’ is Disha’s favourite song, and she focused her attention on BTS member V (formerly known as Kim Taehyung) and showered him with affection. We’re curious to see how Tiger Shroff, her rumoured lover, responded to it!

She put V in the limelight in the video, having him do the hard choreography with fellow member Jin. With stickers as well as the letter “V” sitting between them, she shared the message.

Disha Patani had previously stated that she had been “obsessed” with some other BTS song, “Boy With Luv.” She posted a photo of herself singing along to the group’s famous song Boy With Luv as well as claimed she was ‘obsessed’ with the tune.

Disha was most recently seen in Aditya Roy Kapur’s film ‘Malang.’ She’ll be featured in Salman Khan’s next film ‘Radhe: Your Most Wanted Bhai.’ This Eid, the film will be released. She also stars with John Abraham, Arjun Kapoor, and Tara Sutaria in ‘Ek Villain Returns.’ On February 11, 2022, it will be released in theatres.

Disha Patani, a Bollywood diva, has admitted to being “crazy” with BTS, a Korean boy band. Not only has the actress enjoyed grooving to the sounds, but she’s also been working out to its catchy energetic music. According to the playlist she’s been sharing on social media, her favourite songs include ‘Boy With Luv’ and ‘Home,’ among many others.

Tiger Shroff was one of the B-town stars who got captivated by BTS’s record-breaking single ‘Dynamite’ when it was released last month. The actor, who has always expressed his admiration for the band, paid them the highest compliment by grooving to their new hit tune. Tiger shared his dancing video on his Instagram account with the remark, “Anyone else in love with BTS’ new track! #dynamite?”