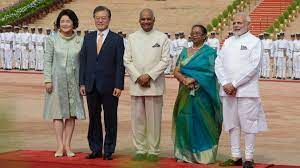 Kim Jung-sook, the first lady of South Korean, is visiting the historic city of Ayodhya in the northern Indian state of Uttar Pradesh.

Ayodhya, well known as that of the birthplace of the Hindu god Ram, has a special meaning for certain South Koreans, with many believing they can trace their ancestors to the city.

This concept is based on various historical Korean traditions about Suriratna, an Indian princess that married a South Korean monarch and established a dynasty.

Princess Suriratna, also known as Heo Hwang-ok, is said to have arrived in Korea in 48 AD, some 2000 years ago, and founded the Karak dynasty by marrying a native king.

According to certain Chinese-language scriptures, the then-King of Ayodhya had a dream in which God told him to send his 16-year-old daughter to marry King Kim Suro in South Korea.

Queen Hwang-ok was the princess of the “Ayuta” kingdom, according to Samguk Yusa (Memorabilia of the Three Kingdoms), a classic South Korean collection of fables and historical legends.

The royal pair was successful. They had ten boys together and lived to be well over 150 years old. Because the two names are phonetically similar, another anthropologist called Kim Byung-mo Ayuta appeared to support the commonly held assumption that Ayuta was truly Ayodhya. However, there is no conclusive proof that the princess ever existed.

According to David Cann of the BBC’s Korean Service, “her genesis tale is deemed mythological and is not regarded historical by scholars.”

“As there is lots of leeway for imagination, there have been various fictional interpretations of the narrative.”

King Kim Suro is the progenitor of the Kim clan, which is located in Gimhae, and Kim is a prevalent surname in Korea. “While children in Korea generally adopt their father’s surname, the queen is reported to have been disappointed that her offspring could not wear her surname,” explains BBC Korean Service reporter Minji Lee.