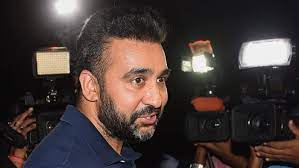 The ED has filed a complaint against Shilpa Shetty’s husband and businessman Raj Kundra in connection with the adult film scam, according to a recent story in India Today.

The Enforcement Directorate has officially charged Raj Kundra, who was detained in the adult film racket case in July 2021. According to a recent story in India Today, the ED has filed a complaint against Shilpa Shetty’s husband, businessman Raj Kundra, in relation to the adult film racket case that broke last year. Kundra was apprehended by Mumbai Police in July 2021 and spent about two months in custody.

While there is no word on when Kundra will be summoned, a rumour claims that questioning might begin next week. Many persons have been accused of being part in the adult film racket, including Kundra, who is suspected of defrauding aspiring models and actresses with promises of roles in web series or Bollywood films.

Under the guise of securing a Bollywood part, these aspiring actors and models were allegedly forced to shoot pornographic film content. According to previous accounts, these performers were blackmailed if they refused to do naked sequences. These pornographic videos were shot in leased bungalows or flats in locations such as Madh Island and Malad’s Aksa. These recorded footage were then reportedly published to subscription-based applications controlled by Raj Kundra and his colleagues. Raj Kundra has kept a low profile in the public eye after his release on bail. Raj Kundra, in fact, always wears a full face mask and a sweatshirt when he leaves the house.

On their wedding anniversary, Sunita Kapoor shares a throwback photo with Anil Kapoor