On their wedding anniversary, Sunita Kapoor shares a throwback photo with Anil Kapoor 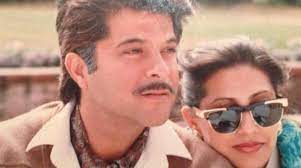 Sunita Kapoor and Anil Kapoor have been married for 49 years.

Anil Kapoor and Sunita Kapoor are one of the most popular couples in Bollywood. They celebrated 49 years of marriage on May 19. Sonam Kapoor, Rhea Kapoor, and Harsh Varrdhan Kapoor are the couple’s three children. One of the most exquisite real-life fairy tale love stories is that of Anil and Sunita. It all began with a hoax phone call. After then, they dated for 11 years before marrying in 1984 and have been one other’s support system ever since.

Sunita Kapoor used social media to share her joy on their wedding anniversary, writing a lovely greeting for her husband Anil Kapoor. Sunita remarked, While discussing vintage photographs, “Happy Anniversary husband you’re my best friend, my human diary and my other half… here’s to us, to our love, to our hearts and to our dreams… and to many more adventures…love you and miss you.”

However, Anil Kapoor has a diverse filmography. He and his son Harsh Varrdhan Kapoor recently starred in the film Thar. Anil Kapoor’s next film is Jug Jugg Jeeyo. Varun Dhawan, Kiara Advani, Neetu Kapoor, Maniesh Paul, and Prajakta Koli feature alongside Anil Kapoor in this movie. On June 24, 2022, the film will be released. The film is produced by Karan Johar’s Dharma Productions and directed by Raj Mehta of Good Newwz fame.

Karan Johar announced the Jug Jugg Jeeyo trailer release date on his official Twitter account, along with a brief video, writing, “This family is about to unleash all the madness to the world – are you ready for it? #JJJTrailer out this Sunday, 22nd May! And catch them on the big screens near you on 24th June.” @apoorvamehta18 @AndhareAjit @AnilKapoor #NeetuKapoor @varun_dvn @advani_kiara.”

In fresh photographs, Aishwarya Rai Bachchan shows off her gorgeous makeup and hairstyle for Cannes 2022