Bollywood Society » Priyanka Chopra on working on Jee Le Zaraa alongside Katrina and Alia: “Women are standing up for women”
Bollywood 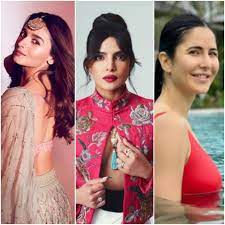 Priyanka Chopra recently discussed how, early in her career, female performers were pitted against one another, and it was all about living in a man’s world.

In a recent interview with Deadline, Priyanka Chopra discussed being a female powerhouse. Female performers were pushed against one other in the start of their careers, and it was all about living in a man’s world, according to the actress. However, the new mom noted that she is now pleased of the “sisterhood” that actors have built inside the profession.

Priyanka elaborated on her trip, saying, “This was early 2000s and yeah there was competition because in any predominantly patriarchal society, women are pitted against each other and there’s just one that can be the best. Over time, I think especially in my generation, we’ve all made immense strides in digging in our feet and creating a sisterhood, which I’m very proud to be part of now as a community.”

When asked how far women have progressed in the entertainment industry, Priyanka cited an example from her upcoming film Jee Le Zaraa. The actress emphasised how female artists are now empowering one another.

She said, “Whether it’s Bollywood or in America, what I’ve experienced is women standing up for women. I’m doing a movie in India now with two of the top actresses in the country, Katrina Kaif and Alia Bhatt, and the three of us decided we wanted to do a movie together and partner together to produce it. But the idea is, yes, it was very different when I started out. We were all pitted against each other, and our casting was very dependent on the lead actor of the movie, and it depends on who is the flavor at that time and that was a very unsettling feeling.”

Priyanka elaborated on how she forged her own path, saying, “It’s a really telling question because it really gave my career a very specific direction because of a specific uncomfortable feeling. I took on many parts which were female-driven. I took on movies that were solely on my shoulders because it was very uncomfortable to have to be the flavour of the season and then not get cast. So, it defines me taking on movies that didn’t necessarily always have the big male leads and it made my career very much my own.”

When Priyanka, Katrina, and Alia revealed Jee Le Zaraa last year, the internet was ecstatic. Farhan Akhtar will helm the three, and the road trip film is set to begin production in September.

Also Read: Priyanka Chopra’s restaurant in New York is visited by Katrina Kaif and Vicky Kaushal: Home away from home

With a ‘bruised face,’ Priyanka Chopra eats ice cream on the set of ‘Citadel’