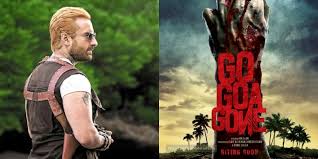 Go Goa Gone had its much-needed edge with a mix of terror and action combined with the perfect comedic timing. As a result, in today’s Monday Masala, we look at Raj and DK’s Go Goa Gone, which was released on this day eight years ago.

There’s no disputing that Bollywood has been creating some thought-provoking flicks recently. Makers have been walking into uncharted territory, delivering audiences films on themes that would have never seen the light of day just a few years ago. This new wave of transformation in Indian film is being welcomed with open arms by the public. Nevertheless, there is no denying that Bollywood has a scarcity of good horror/zombie flicks.

Our movies are strongly influenced by Hollywood blockbusters because the worst thing is that they would still fall short of your aspirations. Nevertheless, Saif Ali Khan’s zombie comedy Go Goa Gone, which has been released eight years ago, was a box office triumph. This movie’s much-needed edge came from a mix of terror and action combined with the appropriate comedic timing.

Roommates Hardik (Kunal Khemu), Luv (Vir Das), and Bunny (Anand Tiwari). After Hardik loses his job and Luv is rejected by his fiancée, the two decide to accompany Bunny on a business trip to Goa. Luv meets Luna (Puja Gupta) in Goa and falls in love with her. She invites them to a rave party hosted by Boris (Saif Ali Khan), a Russian mafia don, on a remote island. Luv and Hardik are enticed by the prospect of endless liquor and pleasure, so they join Bunny on the island. A new medicine is introduced there, but none of them can afford it due to its high cost. When the three friends wake up the next morning, they discover that everything is not right on the island. They’re being pursued by a swarm of zombies. They realise the cause is the ultimate pleasure drug, which was introduced at the previous night’s party. Will they be able to leave the island unscathed? That, in a nutshell, is the plot.

Go Goa Gone is a fantastic blend of horror and humour. Raj and DK, together with co-writer Sita Menon, manage to keep the audience captivated to the screen, owing to the endless stream of humorous and clever lines. The conversations are, without a doubt, one of the film’s best features. Having said that, the picture does not lack in the horror department.

The movie manages to make you chuckle while still giving you the necessary shivers. Saif Ali Khan was a co-producer on Go Goa Gone. He takes a back seat in the movie and allows the rest of the actors do the talking. His character Boris, on the other hand, is undeniably one of the movie’s highlights.

He effortlessly pulls off the blonde hair and stubbled appearance. Saif is one of those performers who isn’t afraid to take on difficult roles. Not many actors would be at ease in such a character, but we’re talking about Saif Ali Khan, after all: he couldn’t possibly go wrong here, could he? Kunal, Vir, and Anand, as a trio, bring much-needed comedy and oddity to this strange voyage.

Go Goa Gone may not have a lot to offer in terms of narrative, but it is still a fun one-time viewing. If you like zombie comedies such as Shaun Of The Dead, Juan Of The Dead, and Zombieland, you might enjoy this one. Eros Now has Goa Goa Gone accessible.

Also Read: Naani: All you should know about this Telugu romantic comedy movie