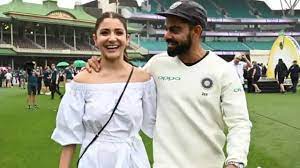 Anushka Sharma said in a recent interview that she gives her husband Virat Kohli batting instructions and shows him her cricket DVDs.

With her film Chakda Xpress, Anushka Sharma is preparing to return to the field. In preparation for her role as bowler Jhulan Goswami, the actress has been working hard and training in the summer heat. Anushka revealed an update on her training in a recent interview with Harper’s Bazaar. Anushka Sharma is married to Indian cricket captain Virat Kohli. It’s no surprise, therefore, that Virat has been assisting Anushka with her cricket playing.

Anushka Sharma admitted to the magazine that she gives her husband Virat hitting instructions and shows him her cricket videos. “We definitely discuss my progress. Whenever I’ve had a good day learning, I like to share my videos with Virat, to get his feedback. Luckily, he’s not a bowler so I listen to my coach more. But I do turn to Virat for batting tips,” Anushka said.

She added, “I always appreciated how mentally pressurising it can be to play cricket, but now, I also understand how physically draining it is. I remember when Virat would sometimes come to see me on a film set, and he would watch us on late-night shoots or in very cold places, he would be bewildered and wonder how we were able to do it. Now, I talk to him about the things that he’s been doing for so many years.”

Anushka Sharma had written a special message to announce Chakda Xpress earlier this year. According to the actress, “It is a really special film because it is essentially a story of tremendous sacrifice. Chakda Xpress is inspired by the life and times of former Indian captain Jhulan Goswami and it will be an eye-opener into the world of women’s cricket. At a time when Jhulan decided to become a cricketer and make her country proud on the global stage, it was very tough for women to even think of playing the sport. This film is a dramatic retelling of several instances that shaped her life and also women’s cricket.”

Also Read: Anushka Sharma EXPLAINS how her pregnancy caused Chakda ‘Xpress to be delayed: I felt quite anxious