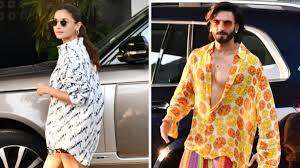 Rocky Aur Rani Ki Prem Kahani, directed by Karan Johar, is one of the most anticipated films of the year. Alia Bhatt, Ranveer Singh, Dharmendra, Shabana Azmi, and Jaya Bachchan will act in the film. The actors and crew have been filming in a variety of locales around the United States. It is a love drama film produced by Viacom18 Studios and Johar’s Dharma Production. Alia, Ranveer, KJo, and Shabana were photographed by photographers at the Mumbai airport a few hours ago as they headed out to shoot Rocky Aur Rani Ki Prem Kahani.

The married actress Alia aced her airport fashion in a loose blouse and black shorts, while the Dil Dhadakne Do actor sported a colourful attire, as shown in the images. Shabana donned a blue shirt with blue denim pants, while Karan was dressed in a black and white paisley design tracksuit. When they were sighted at Mumbai’s Kalina airport, the actors posed for the photographers.

Deepika Padukone will join the jury of the Cannes Film Festival in 2022, with other celebrities