Bollywood Society » What does Blackpink say about chaelisa?
K-pop 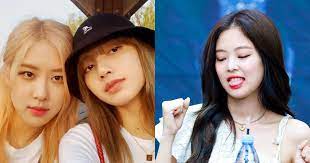 Rosé just published her first solo album R, which includes the operatic title ballad On The Ground as well as the quiet, bittersweet single Gone. Blackpink all around the world greeted Rosé’s solo debut with loud applause. In the first 24 hours after its release, On The Ground received 3,262,615 streams. This is the first time a solo K-pop artist has won. Not only that, but she also performed on SBS’ Inkigayo, to a standing ovation from the audience. However, there was someone special who gave Rosé roses and a nice card with such a sweet message.

Lisa, Blackpink maknae and a fellow 97-liner within-group was the one that said it. “Look who came through today,” Rosé captioned a photo of herself and Lisa on Instagram. Despite the fact that Lisa’s face was hidden, BLINKS recognised her and filled Rosé’s comments with ChaeLisa and loving emoticons. Rosé’s Korean name is Park Chaeyoung, for those who are unfamiliar. Today, we revisit one of the most pivotal scenes from Blackpink’s documentary, Light Up The Sky, in which Rosé and Lisa candidly discuss their first thoughts of one another. Lisa reminisced on how she used to think of Rosé as a competitor, to which Rosé responded that she was genuinely terrified by everyone’s brilliance!

Lisa said in a voice-over that she and Rosé bonded quickly since they were the same age and had similar likes. They also relied on one another in difficult situations because they were from different nations. “We started to resemble two peas in a pod. We were identical twins.” Lisa showed her affection for Rosé, saying that Lisa is like a sister to her. Cheers to ChaeLisa and their everlasting friendship.

What are your thoughts on Rosé and Lisa’s friendship, BLINKS? Inside the comments section below, tell Pinkvilla what you think.

Also Read: Which Blackpink member interacts the most with their fans?

Which Blackpink member interacts the most with their fans?

How ethical is the therapy in reality TV shows?