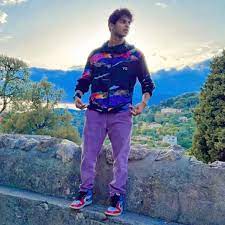 Isn’t Ishaan Khatter a fan favourite? He is Bollywood’s newest talent, and he is here to stay. Ishaan has shown to be a force to be reckoned with his amazing and excellent performances. Ishaan has proven his mettle with each film and has amassed a large fan base throughout the country. The lovely actor enjoys sharing his stunning photos on Instagram, and his admirers are even more enamoured. He just uploaded a beautiful photo of France on Instagram, and we instantly fell in love.

Ishaan Khatter appeared to be quite attractive in the Instagram image. He paired a bright blazer with lavender sweatpants and fashionable sneakers to complete the ensemble. We were taken aback by the countryside behind him. In the photo, he even tagged his brother. He also mentioned one of Shahid’s catchy songs in the caption. He wrote, “Rang sharbaton ka.”

Of course, the post quickly went viral. Who could resist Ishaan’s attractive features? One admirer delightfully completed the song’s phrase by writing, “Rang sharbaton ka”. On the other hand, another wrote, “Aww”.

In the meantime, on the professional front, Ishaan Khatter is going to play Brigadier Balram Singh Mehta in the forthcoming movie Pippa. It is based on the life of Brigadier Balram Singh Mehta, a war veteran who participated in the Indo-Pakistan war of 1971 alongside his brothers. Mrunal Thakur will play Khatter’s younger sister, while Priyanshu Painyuli will portray his older brother.

Kiara Advani recounts her difficult times: I got...

Most comedic remarks and punchlines, according to Kiara...