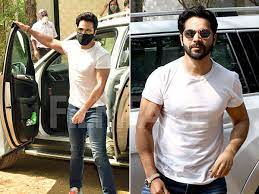 The paparazzi have become an integral part of B’Town’s culture. Every day, superstars in the entertainment sector are photographed as they walk around the city. Shutterbugs are everywhere, photographing the actors at airports, gyms, restaurants, and recording studios. Fans eagerly anticipate catching a peek of their favourite celebrities on social media, where the photographs quickly become viral. The media persons snapped none other than Varun Dhawan in the dream city of Mumbai on Tuesday night. Take a look at his photos.

Varun Dhawan was pictured in Mumbai’s Juhu neighbourhood just a few hours ago. For the evening, the actor was spotted dressed in elegant casuals. Varun was dressed casually in a white tshirt and black joggers. Varun wore a pair of stylish black and white sneakers as his footwear. A black hat was also worn by the Bhediya actor. He recognised the photographers and posed for pictures while they snapped him from afar.

Varun Dhawan, on the other hand, has a bevvy of exciting projects in the works. He will appear in Raj A Mehta’s family comedy Jug Jugg Jeeyo, which also stars Anil Kapoor, Neetu Kapoor, and Kiara Advani. Varun also stars in the horror movie Bhediya alongside Kriti Sanon. Varun will also star alongside Janhvi Kapoor in Bawaal. He also has Citadel, which he shares with Samantha Ruth Prabhu.

Tiger Shroff, shirtless, strolls over a cinematic environment while listening to his song “Unbelievable”

Madhuri Dixit is dressed to the nines in...

With wine and smiles, Neha Dhupia and Angad...