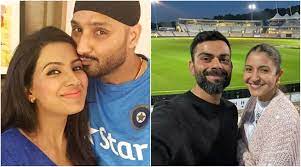 Bringing up a kid is a major duty for parents, and it necessitates both mother and father’s participation. In a recent talk about equitable parenting, actress Geeta Basra discussed paternity leave and applauded Virat Kohli for bringing the matter to light. In 2020, during the Border-Gavaskar tournament, Virat Kohli took paternity leave to be his wife Anushka Sharma after the birth of their daughter Vamika. His decision was applauded by everybody.

In a recent interview with Etimes, Geeta, who is also the mother of two children with Harbhajan Singh, discussed how parenting necessitates the presence of both parents. While paternity leave is normal in the United Kingdom, where she was reared, it was first publicised in India when Virat Kohli took it for his wife Anushka after the birth of their daughter Vamika. Harbhajan is a ‘hands on’ parent, according to the mother of two, and is equally active in the raising of Hinaya Heer Plaha and Jovan.

Geeta told the portal, “Raising a child is as much a responsibility of a father as it is of a mother. In the UK, paternity leave is a common thing. In India, many are not even aware that such a thing exists. It’s great that Virat Kohli shed light on this issue. That awareness has to be there. Parenting is collaborative work. Bhajji is changing our son’s diaper as we speak. He is a hands-on dad.”

In July 2021, Harbhajan and Geeta welcomed their second child, Jovan Veer Singh Plaha. Prior to it, they had a daughter named Hinaya Heer Plaha. Virat and Anushka, on the other hand, became parents in January 2021. Vamika, their daughter, was born on January 11th, and the two have been quite protective of her since then. Anushka and Virat have asked the paparazzi to refrain from repeatedly photographing their newborn and to respect their privacy.

Also Read: Virat Kohli’s leg is pulled by Anushka Sharma in the comments section after he tweets their hilarious selfie

Rakul Preet Singh and her boyfriend Jackky Bhagnani look stunning during the birthday party of the former’s brother.

In their latest PHOTOS, Virat Kohli can’t take his gaze away from Anushka Sharma