Rakul Preet Singh and her boyfriend Jackky Bhagnani look stunning during the birthday party of the former’s brother. 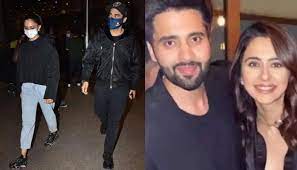 When a B-Town couple ventures into the city, the paparazzi make sure they are photographed for their followers. Rakul Preet Singh and producer boyfriend Jackky Bhagnani were spotted at Rakul Preet’s brother’s birthday event at Bastian on Friday night, according to reports. Rakul Preet Singh and Jackky Bhagnani have become the industry’s new favourite duo. The pair is never denied the opportunity to spend quality time together, from lunch dates to vacations. The two wowed us with their trendy outfits at the celebration. Surili Goyel and Pragya Jaiswal were also present at the event.

Rakul Preet looked gorgeous as usual. She was dressed in a black gown that fit her well. She completed the ensemble with a pair of stunning golden earrings and shoes. Her radiant grin shone brightly throughout the room. When it came to producer Jackky Bhagnani, he looked suave in a black tuxedo and captured our hearts. Surili Goyel, a fashion designer, looked stunning in a one-shouldered blue shirt with white leggings. Our adorable birthday boy, Rakul’s brother Aman Preet, looked dashing in his patterned shirt. Pragya Jaiswal chose a glitzy olive green gown that complemented her well.

Meanwhile, Rakul Preet Singh’s new film Attack, starring John Abraham and Jacqueline Fernandez, was released in theatres on Friday. She will also star in R. in South. Ayalaan is a Tamil film directed by Ravikumar and starring Sivakarthikeyan. Due to Covid-19, the film’s release has been postponed.

Also Read: Rakul Preet Singh discusses how she prepared for her role as a scientist in Attack

In the sequel to Attack, John Abraham wants Hrithik Roshan or Tiger Shroff to feature