In their latest PHOTOS, Virat Kohli can’t take his gaze away from Anushka Sharma 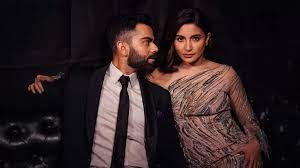 Anushka Sharma began Saturday in style, surprising fans with fresh and breathtaking photographs of her and Virat Kohli from what appears to be a session. The power couple dressed up in formals and looked their best in the new photographs, making a snappy statement. Virat wore a black suit, while Anushka wore a gleaming gown. The Indian batsman couldn’t keep his gaze away from his stunning wife Anushka, and fans were left speechless.

Anushka Sharma published stunning images of herself and Virat Kohli lounging on a black couch on her Instagram account.

Virat wore a black suit with a matching tie, while Anushka wore a stunning gown with a feather design at the bottom. Anushka stated in her post on sharing the photographs, “We clean up well.” As soon as the photos were shared on social media, celebs, as well as fans, reacted to them. While Zoya Akhtar was all hearts for Anushka and Virat’s photos, Saba Ali Khan Pataudi agreed with her caption and wrote, “VERY well indeed. Mahsha’Allah.”

Virat recently posted a sweet photo with their wife Anushka and showed followers a glimpse of Vamika’s playpen at home. In the comments section of the article, Anushka joked about doing “everything for her followers” and addressed Virat as one of them. Virushka admirers have been loving the beautiful visual goodies that the power couple has been sharing on social media for them. The couple’s most recent ad together went viral on social media, and their chemistry grabbed hearts once more.

On the job front, Anushka has left Clean Slate Productions to pursue her first love, acting. Currently, she is filming for Chakda Xpress. The movie will be available on Netflix. Virat Kohli, on the other hand, will play in the IPL 2022 for Royal Challengers Bangalore.

On his first film, Faltu, Remo Dsouza says, “It was a major thing for me in many respects”