In the absence of Anushka Sharma, ‘sophisticated’ Virat changes to ‘Delhi ka Virat’ 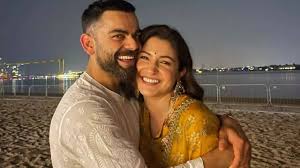 Many people look forward to Virat Kohli and Anushka Sharma as a power couple who set some major couple goals. Virushka (as fans affectionately refer to them) make every fan’s heart melt with their simplicity and romance, whether in photos with one other or in gestures for each other captured on camera. Kohli’s old teammate Pradeep Sangwan recently disclosed some details about the India cricketer in an interview with Indian Express, which we are sure will astound you.

We’ve all heard husbands act gentlemanly in front of their wives yet utterly different in front of their buddies. Pradeep Sangwan claimed that he was pleasantly delighted to see that Virat Kohli hasn’t changed at all since one such occurrence. Virat and Pradeep recently met at an occasion, and according to Sangwan, Pradeep expected Kohli to act differently when they met. But, to his surprise, he was the same as before. Virat’s sole difference, according to the former bowler, was that he behaved in a sophisticated manner in front of his wife Anushka Sharma, but as soon as she left, he reverted to his old self, cracking jokes and playing pranks.

Pradeep Sangwan said, “As soon as Anushka crossed over to other side of the room, bhai chalu ho jaate (he starts with his pranks). The moment his wife returned, he became a nice boy. As soon as his wife went to meet someone, Delhi ka Virat Kohli was back to talking in the same old style.”

Virat Kohli recently played his 100th test match, and the manner Anushka Sharma supported him on the pitch was adored by many.

Also Read: Anushka Sharma prepares for Chakda Xpress before flying to the UK

With his bulked-up physique, Ranveer Singh is ready to ‘tear it’