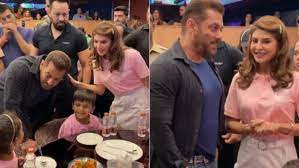 Salman Khan’s name has been at the top of the list of the most generous Bollywood celebs. The Bollywood Bhaijaan is known for stepping up to aid those in need, and he really encourages those who wish to join the cause. His Kick co-star Jacqueline Fernandez recently organised a party to commemorate the one-year anniversary of her YOLO organisation. Salman Khan also attended the celebration with Jacqueline and was seen talking with the children who were present. The footage of the celebrity from the occasion has gone viral among his followers.

The footage of Salman and the actress at the bash was published by Jacqueline’s foundation. In the video, the Bajrangi Bhaijaan actor can be seen conversing with little children as they eat their dinner. He’s also seen on stage with Jacqueline, addressing everyone. Before bidding the party farewell, the celebrity put a beautiful kiss on a small girl’s forehead. Salman was accompanied by Jacqueline during the ceremony, and the two talked to the youngsters together.

Meanwhile, Salman Khan has been busy filming, and his forthcoming film, Kabhi Eid Kabhi Diwali, has recently been making news. Shehnaaz Gill would be making her Bollywood debut in the film, according to the celebrity.

Not only that, but us just exclusively revealed that Salman would begin filming for the project alongside Aayush Sharma in Mumbai on May 15. Pooja Hegde co-stars alongside Salman in the flick. According to a source who spoke on the condition of anonymity, “Salman will begin shooting for Kabhi Eid Kabhi Diwali in Mumbai. Farhad(Samji) has already begun work on the pre-production formalities, and is excited to start filming.”

Salman Khan will also appear in Tiger 3 alongside Katrina Kaif as well as Emraan Hashmi. The film’s filming was completed a few months ago, as well as a teaser trailer was released to promote the release date. The movie is slated to hit theatres in 2023.

Also Read: Salman Khan’s second innings in films, according to Bobby Deol: “Race 3 marked the beginning of a lot of things”