Bollywood Society » Tabu, Vijay Varma, and Manoj Bajpayee will appear in the Hindi audio adaptation of The Sandman
Web-Series 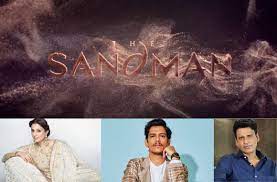 On Thursday, the cast for Neil Gaiman’s best-selling graphic novel series ‘The Sandman’ in Hindi was unveiled.

Tabu will be the narrator in the Hindi audio rendition of ‘The Sandman,’ which Neil will executive produce. Vijay Varma will play Morpheus/Dream, Manoj Bajpayee will play Doctor Destiny, and Neeraj Kabi will play Lucifer.

Shailesh Sawlani, VP and Country GM, Audible India, added to the news, saying, “The Sandman is a cultural phenomenon that has pierced the zeitgeist. We are thrilled to bring together some of India’s most celebrated, beloved and iconic voices to breathe life into this fan-favourite epic fantasy. We are honoured to be working alongside DC to create this truly local and immersive adaptation that we are confident fans and listeners will love.”

An unique musical soundtrack by British Academy Award winner James Hannigan will be used in the project’s cinematic atmosphere.