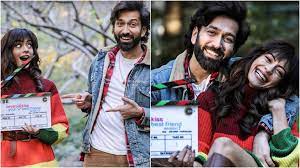 Season 2 of ZEE5’s fan-favourite franchise is now available. Lead actors Nakuul Mehta as well as Anya Singh are reprising their roles inside the franchise and therefore are presently filming in London well with the rest of the cast. The eight-episode online series picks off where the previous season left off. Tanie and Sumer, portrayed by Anya Singh and Nakuul Mehta, correspondingly, are two best friends who formerly dated and now are compelled to reconcile after such a long time of separation in Season 2. Season 2 is sure to be an exciting narrative with these fresh feelings and Sumer and Tanie’s rekindling old relationship.

“With a focused focus on creating unique and accessible content, ZEE5 is returning with yet another season of a hit series, ‘Never Kiss Your Best Friend,'” stated Manish Kalra, Chief Business Officer, ZEE5 India. This season will be a riot and a whole package, as well as we can’t wait to premiere this youthful, energetic, and timely series.”

According to Nimisha Pandey, ZEE5’s Chief Creative Officer for Hindi Originals, “Romance as a genre has always resonated very strongly with millennials and ‘Never Kiss Your Best Friend’ is a flavoursome romantic drama that has been loved by audiences far and wide. We are excited to bring the second season of this ZEE5 Original series very soon. As the story progresses and takes interesting twists and turns, we hope that this contemporary take on Sumer and Tanie’s special relationship paired with new faces and stunning locales will make our viewers’ hearts smile.”

According to Nakuul Mehta, “In an era of action thrillers and complex dramas, a slice of life story about friendship & growing up really got me excited about ‘Never Kiss Your Best Friend’ in the first place. We are back in London filming our new season and I’m very excited to reunite with Anya and an ensemble of very exciting artists and take this franchise ahead on ZEE5”.

According to Anya Singh, “What started off as a slice of life show turned into an experience, I would never forget not only because of the great memories I got to create but also because of the love that people gave ‘Never Kiss Your Best Friend’. And it’s only because of that love that we are back 2 years later to create some more memories while reliving the nostalgia of season 1 with my BFF Nakuul and a whole new family.”

Never Kiss Your Best Friend – Season 2 will broadcast on ZEE5 early next year, directed by Harsh Dedhia and produced by 11:11 Productions.

Who is the #1 artist on Spotify?

Will bars be able to have entertainment when...

BTS’ RM is not in a relationship, according...