Bollywood Society » When will the Warrior Nun on Netflix premiere?
Netflix 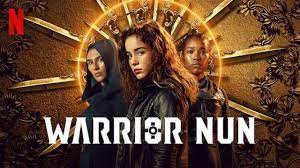 Originally conceived as just a feature movie adaptation, the project was reimagined as both a television series for Netflix after the company received a first-season series order. Filming took place in a variety of places around Andalusia, including Antequera, in which the fictitious Order of the Cruciform Sword’s headquarters was filmed.

Alba Baptista, a Portuguese actress who plays Ava Silva, a paraplegic orphan who finds she has magical abilities and is compelled to accept an old order of warrior nuns, narrates and leads the series.  Baptista makes his English-language debut in this series. Toya Turner, Thekla Reuten, Lorena Andrea, Kristina Tonteri-Young, as well as Tristán Ulloa are among the cast members.

The series premiered on Netflix on July 2, 2020, to mostly good reviews. The sitcom got renewed for a second season in August 2020.

The storey of a 19-year-old lady who wakes up in a mortuary with a fresh lease on life and a heavenly relic lodged in her back is told in Warrior Nun. She learns that she is now a member of the ancient Order of the Cruciform Sword, which has been charged with combating demons on Earth, and great forces from both heaven and hell are on the lookout for her.

From March 11, 2019 until July 5, 2019, filming for the very first season did take place in Andalusia (Spain), inside the towns of Antequera (where the Order of such Cruciform Sword’s headquarters are situated), Marbella, Ronda, Málaga, as well as Sevilla. One of it’s settings included the El Tajo Gorge. The second season’s pre-production started in late May 2021, with shooting beginning around late July 2021 in Madrid, Spain. The second season’s filming finished on November 4 in Spain.

Also Read: Will there be a season 3 of Netflix’s Ragnarok?

Will there be a season 3 of Netflix’s Ragnarok?

Will there be a season 3 of Netflix’s...

Who has the most screen time in the...

What city is the web series Time is...

Whatever happened to the first actress to star...