Bollywood Society » Shahid Kapoor’s BTS video ahead of the release of Jersey is overly bright with promotions, poses, and perfection.
Movies

Shahid Kapoor’s BTS video ahead of the release of Jersey is overly bright with promotions, poses, and perfection. 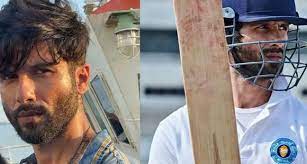 Shahid Kapoor is ecstatic these days, and for good reason. After all, his much-discussed film Jersey will eventually enter theatres on April 14 this year. The film is a Bollywood replica of the Telugu film Jersey, which won a National Award and starred Nani. Jersey will star Shahid in the character of a cricketer, and he has great expectations for the film. In fact, the Batti Gul Meter Chalu actor has already started promoting the film and is doing everything he can to get fans eager about Jersey.

In the midst of all, Shahid, who is quite active on social media, has uploaded a behind-the-scenes video from the Jersey promos. He showed himself strolling around Jersey promotions in style in the video, and his swag was unsurpassed. Shahid opted for a semi-formal outfit for the Jersey promotions, and his style game won hearts. Shahid also shared a preview of his cricket bat and ball abilities, as well as the fun he had on the sets of India’s Got Talent 9. “Everyday I’m shuffling,” he captioned the video.