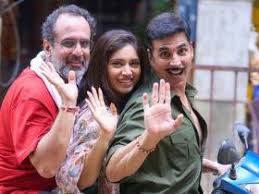 The film will be released on the same day as the Raksha Bandhan festival, which is celebrated across India and Akshay Kumar is leading from the front.

Akshay Kumar is back with a fresh new film, ensuring that his run of flicks on the big screen continues. The family drama, directed by Aanand L Rai and starring Akshay Kumar and Bhumi Pednekar, is named Raksha Bandhan. The trailer for the film will be released on Tuesday evening. Akshay Kumar tweeted yet another new poster depicting him and his onscreen sisters ahead of the trailer’s release.

The film will be released on the same day as Raksha Bandhan, which is celebrated across India. The film, like the occasion, will focus on the beautiful kinship that exists between brothers and sisters.

Aside from Bhumi and Akshay, the film’s core cast also features Sahejmeen Kaur, Deepika Khanna, Sadia Khateeb, and Smrithi Srikanth, who play sisters. Akshay Kumar correctly defined the film as a “story of love, joy, family, and the unbreakable link that binds them” before.

Also Read: Suriya confirms his appearance in the remake of Soorarai Pottru, saying, “Seeing Akshay Kumar as Vir was nostalgic”

Disha Patani is turning up the heat, and in a big way; check out her new PICS in a beige cut-through dress