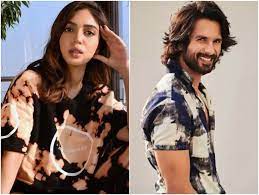 Everyone is aware that Shahid Kapoor has signed a project alongside Ali Abbas Zafar and now as per reports Bhumi Pednekar has signed off. We were among the first to inform you that this is a remake of the French thriller Nuit Blanche, which means “Sleepless Night” (translated in English). Now we can reveal that now the filmmaker intends to shoot this on a massive scale with a lot of adrenaline-pumping action and begin shooting it on the sets before the end of the year.

Whereas the movie is really a parent attempting to recover his stolen child from of the mafia over the course of one night, the producers have been on the search for a prominent Bollywood actress to play alongside Shahid Kapoor.

A close source informed us that, “Bhumi Pednekar was approached for the role. The makers felt she will fit the bill as Shahid’s wife and although the film primarily traces one day in Shahid’s life, Bhumi’s role is extremely important and pivotal. The makers had offered the film to Bhumi a few weeks ago.”

However, we’ve learned that Bhumi Pednekar has refused the role. The same source also says: “Bhumi Pednekar feels there is meat lacking in her part and that’s why she decided to say no to it. After her rejection, the makers are now on the hunt for another heroine to play the lead opposite Shahid.”

Bhumi is now collaborating with Akshay Kumar on Aanand L. Rai’s Raksha Bandhan and Shashank Khaitan’s movie, which also stars Vicky Kaushal and Kiara Advani and is directed by Shashank Khaitan. She would star alongside Rajkummar Rao in the film Badhaai Do. Shahid is currently filming a thriller web series with Raashii Khanna and Vijay Sethupathi for Raj & DK. In Jersey, he will appear with Mrunal Thakur and Pankaj Kapur.

Ali was supposed to begin filming his superhero flick, tentatively dubbed Super Soldier, with Katrina Kaif. The movie has been postponed due to the epidemic.

Also Read: Kabir Singh: All you should know about this Shahid Kapoor movie

The health of Lata Mangeshkar health has improved...