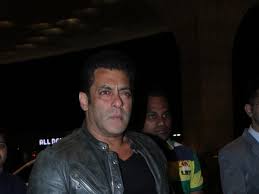 Salman Khan is one of the most well-known actors in Bollywood history. The superstar has a devoted cult following and a career spanning more than three decades. He continues to enchant audiences with his swag and exudes his unique vibe. Despite his celebrity, he cherishes his followers and makes it a point to welcome them on his birthdays and throughout Eid, in addition to other fan engagements.

The Bhaijaan of Bollywood was sighted at the Mumbai airport this evening as he prepared to fly to Abu Dhabi’s Yas Island for work commitments. In his blue t-shirt, black jacket, and torn jeans, he looked sleek and elegant as he made his way to the airport terminal to catch his aircraft to Abu Dhabi. He was met by a fan holding a photograph of the celebrity and his mother in a photo frame. As he posed for a photo with the fan, the Dabangg star welcomed the gesture. The lucky fan was overjoyed to be able to take a photo with the star.

Salman Khan most recently starred opposite Aayush Sharma in Mahesh Manjrekar’s Antim, and he will next be seen in his unnamed next with Farhad Samji, which is set to debut in the final week of 2022. The film features an ensemble cast that includes significant personalities from the Telugu and Hindi cinema industries. Following his project with Farhad Samji, he will star with Katrina Kaif and Emraan Hashmi in Yash Raj Films’ Tiger 3, which will be released on Eid 2023. Apart from these films, Anees Bazmee’s No Entry Mein Entry and Tigmanshu Dhulia’s Dabangg 4 are now in production. While the No Entry Mein Entry script has been broken, Dabangg 4 is still taking its time. The actor has also confirmed his involvement in the sequel to Bajrangi Bhaijaan, Pawanputra Bhaijaan, which is being written by V Vijendra Prasad, who also wrote Bajrangi Bhaijaan. We can hardly keep up with the actor’s goal of releasing two major films every year in the future.