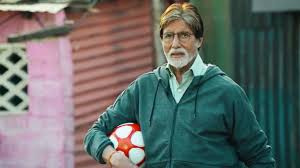 Amitabh Bachchan is a Bollywood superstar who requires no introduction. He’s been in charge of the industry for decades. On social media, the actor has a sizable fan base, and he is always updating his followers on everything that is going on in his life. The actor is well-known for his sarcastic, funny, and eccentric demeanour. He never fails to impress his fans with his style, and they eagerly await the release of his photographs into the public domain.

In fact, as he walked out the door for work, the Don star uploaded a photo on Instagram. Big B is dressed in a green jacket and black jeans in the snap. “Stepping out to work .. somewhat green !!”. As soon as he posted the snap, his daughter Shweta Bachchan reacted to it and commented, “Spring in your step.”

Navya Naveli Nanda, his granddaughter and Shweta’s daughter, also replied to his tweet. In addition, people sent heartfelt words in the comments area.

On the job front, Amitabh Bachchan was most recently seen in the film Jhund, in which he portrayed a football coach. He also appeared in the film Runway 34, directed by Ajay Devgn. Following that, the actor will appear in Ayan Mukerji’s flick Brahmastra. Alia Bhatt, Ranbir Kapoor, and Mouni Roy all play pivotal parts in the film. The movie is supposed to be the first of a planned trilogy.

It will be published in five Indian languages on September 9: Hindi, Tamil, Telugu, Malayalam, and Kannada. Uunchai, helmed by Sooraj Barjatya, is also under Big B’s umbrella. Parineeti Chopra, Boman Irani, Anupam Kher, and Neena Gupta all play key parts in the movie.

In a UNSEEN photo from the winters, Soha Ali Khan and her daughter Inaaya pose sweetly with Saba Pataudi