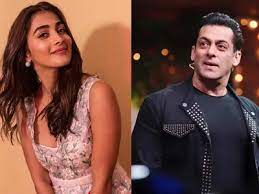 Salman Khan’s fans have plenty of reasons to be happy these days. After all, the actress is getting ready to start filming for her forthcoming film Kabhi Eid Kabhi Diwali. The film, directed by Farhad Samji and starring Salman Khan brother-in-law Aayush Sharma, is one of the most anticipated releases of the year. As the public anticipates the release of Kabhi Eid Kabhi Diwali, Salman will begin filming for the film in Mumbai tomorrow, according to a fresh report.

The crew will shoot in the Golden Tobacco plant in Vile Parle, according to an article published in a Mid Day. The article further claimed that the crew had constructed two massive structures on the location.

According to reports, the team will film a long programme at Mehboob Studio in Bandra after a 10-day schedule. “One of the sets is that of a metro station. The first scene will be filmed in this set-up. Shooting at a real metro station was not feasible due to crowd management problems, so the makers chose to erect a huge set instead,” a source was quoted saying.

In addition to Salman Khan and Aayush, Kabhi Eid Kabhi Diwali will have Zaheer Iqbal and Pooja Hedge in the key roles. Shehnaaz Gill will indeed be making her big Bollywood debut with the film, according to reports. However, no formal confirmation has been given in this respect. Kabhi Eid Kabhi Diwali is scheduled to be released in December of this year.

However, Salman is hard at work on that Tiger franchise’s much-anticipated third edition. Tiger 3 will indeed star Katrina Kaif and Emraan Hashmi, with Salman returning his role as Tiger and the Ajab Prem Ki Ghazab Kahani actress resuming her role as Zoya. The movie, directed by Maneesh Sharma, will star Emraan Hashmi as the main antagonist.

Most comedic remarks and punchlines, according to Kiara Advani, are reserved for male actors: Definitely lets you down.