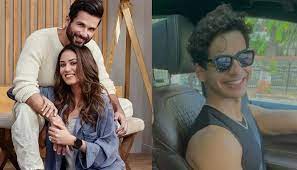 Mira Rajput, Shahid Kapoor’s wife, is a social media sensation who keeps her fans and admirers up to date on everything she does. She uses social media extensively and makes it a point to update her fans on her travels. She shares personal moments with her family, stunning photoshoots, and retro recollections on Instagram. She not only walks the runway, but she also works with fashion firms on a number of projects. Mira and her brother-in-law Ishaan Khatter have a great relationship, as seen by her newest Instagram story.

Ishaan Khatter, his brother Shahid Kapoor, Suved Luhia, and Kunal Khemu recently went on an all-boys biking vacation in Europe, as well as they posted a lot of images and videos from their motorbike diary where they flaunted their motorcycles and helmets. They biked across the mountains and valleys, and based on what they’ve revealed, it’s safe to assume they had a great time.

Mira Rajput manages to keep herself occupied with her designer consignments while still caring for her two children. Shahid Kapoor, her spouse, often praises her and compliments her on how effectively she balances career and family life. Ishaan Khatter is working on several projects at the moment. This year, he has two major releases: Phone Bhoot, directed by Gurmeet Singh and starring Katrina Kaif and Sidhant Chaturvedi, and Pippa, starring Mrunal Thakur and directed by Airlift’s Raja Krishna Menon. Shahid Kapoor will next be seen in Farzi, an Amazon Prime original film directed by Raj and DK and starring Vijay Sethupathi. He’s also been filming for Ali Abbas Zafar’s unnamed action flick, which will be released shortly.

Hema Malini felt compelled to share a ‘twinning’ photograph with Dharmendra, and she did so