Ajay Devgn admits to doing “crazy things” as a kid, including taking his father’s rifle 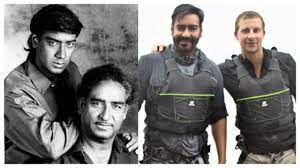 Ajay Devgn is one of Bollywood’s most brilliant and promising performers. The Singham actor is presently promoting his new film, Runway 34, in which he co-stars with Rakul Preet Singh, Amitabh Bachchan, Boman Irani, Angira Dhar, and Aakanksha Singh. Now, in a recent interview with The Film Companion, Ajay talked about his childhood and how he did “crazy things.” The Singham actor has also admitted to grabbing his father Veeru Devgan’s rifle without his permission.

The actor said, “I could say all this now I have a little better image so I think let’s maintain that but we’ve done wild things in our youth everybody does at that time things were very lenient also. So, I mean including the law and the media, things were quite lenient and very forgiving. It’s not anymore.” Then, Ajay looked at the audience and said, “We’ve gotten away with a lot of things, you all can’t. We’ve had a lot of fun, you all really can’t.”

Ajay stated he was headed to jail in an old interview with Mid-Day in 2018. In addition, he admits to being a “gunda in college.” According to Devgn, “I have been behind bars twice inside a lock-up; even sneaked out my father’s gun. And guys, that’s illegal.”

Meanwhile, Ajay Devgn is the director of Runway 34, which is produced by Ajay Devgn Films. On April 29, the film will be released in theatres with Heropanti 2, starring Tiger Shroff, Tara Sutaria, and Nawazuddin Siddiqui.

Also Read: Singham 3 is in the works: Ajay Devgn reveals that filming would begin before the end of the year

When Neetu Kapoor and Ranbir Kapoor were filming an advertisement