With a ‘bruised face,’ Priyanka Chopra eats ice cream on the set of ‘Citadel’ 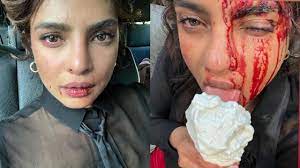 Priyanka Chopra is a well-known actress who needs no introduction. She is a frequent social media user with a sizable fan base. The Bajirao Mastani actress occasionally updates followers on her everyday activities. Priyanka Chopra is presently filming her next Hollywood debut online series Citadel, which she has teased with her avatar. Speaking of which, the actress shared a photo of her injured face while eating lunch a few hours ago.

The Mary Kom actress Priyanka Chopra is seen having ice cream for lunch in a photo she shared on her Instagram story. “Ice cream for lunch. Shoulda saw the other guy (winking emoji)” As she films another action scenario for the series, Priyanka’s face is covered in fake bruises and blood.

On Wednesday, she published a photo of her injured face on social media and asked her fans, “How are you doing?” “Did u have a tough day at work as well?” accompanied with a big smile emoticon. She also added the hashtags, “actor’s life”, “Citadel” and “a day in the life.”

After birthing her baby Malti Marie Chopra Jonas with her husband, musician Nick Jonas, in January, the new mom continued shooting for the programme. On her return to work, the Dil Dhadakne Do actress uploaded an Instagram Story snapshot from the set. She wrote in a message, “Back to work. Citadel.”

In the meanwhile, the Russo brothers of the Avengers fame are directing Citadel. It’s one of the most anticipated ventures, and Priyanka Chopra will be collaborating with Eternals star Richard Madden on the film, which will debut on Amazon Prime Videos.

Aside from that, the Baywatch actress has a number of intriguing projects in the works. She recently starred as Sati alongside Keanu Reeves in The Matrix Resurrections, an American science fiction action thriller. She will then star alongside Sam Heughan and Celine Dion in the love drama It’s All Coming Back To Me. Priyanka also has Ending Things and Jee Le Zaraa, a Bollywood film directed by Farhan Akhtar, in which she stars with Katrina Kaif and Alia Bhatt. After the 2019 film The Sky Is Pink, Priyanka will return to Indian screens with this flick.

Also Read: Priyanka Chopra on working on Jee Le Zaraa alongside Katrina and Alia: “Women are standing up for women”