Nikunj Lotia, a YouTuber, REACTS to a popular video about Alia Bhatt’s wedding 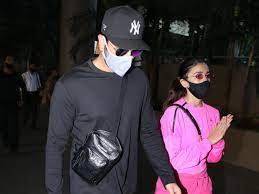 The wedding of Alia Bhatt and Ranbir Kapoor is causing quite a stir on social media. Alia Bhatt and Ranbir Kapoor are due to marry this week, and fans can’t wait to see the soon-to-be-married pair for the first time. Nikunj Lotia, better known on YouTube as BeYouNick, recently posted a humorous video about Alia-wedding. Ranbir’s The actress from ‘Highway’ even left a remark on the post.

Nikunj Lotia was seen urgently rushing behind a car with the banner ‘Alia weds Ranbir’ inscribed on it in the video. He also included a photo of himself with Alia, which he then swapped with Ranbir’s. He added a melancholy tune to the video to make it extra hilarious. “Ded (laughing emoji),” Alia wrote. Nikunj Lotia replied to the footage in a recent interview with Hindustan Times, saying, “I felt like I was doing this [making a video] for the first time. I got the same feeling which I got the first time a video made by me went viral.”

He said Alia Bhatt has previously commented on his videos, but after reading the stories, he realised this was the first time she had replied to something linked to her wedding.

Meanwhile, Alia and Ranbir’s wedding preparations appear to be well on. The Krishna Raj Bungalow, Ranbir’s ancestral home, and RK Studios were all lit up. The wedding festivities will take place between April 13 and April 17, accordingly.