Mr and Mrs Mahi is the title of Dharma Productions’ film 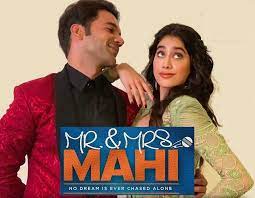 Well with the super-duper success of Kuch Kuch Hota Hai, Dharma Productions, one of the country’s most prestigious production organisations, received a boost (1998). It was also Karan Johar’s directorial debut, and then after that, it was known as that of the candyfloss movie studio. Nevertheless, during the last decade, Dharma has experimented with a wide range of genres, and as a result of its success, it has grown into such a production company unlike any other.

Earlier in the very day, Dharma Productions’ Twitter account said that they will be making a big announcement about their next project.

The title of the picture, as well as its star cast and director, have yet to be revealed, but it is slated to be revealed around 8:00 p.m. last night.

The specifics, on the other hand, have been discovered.

According to a source, “The name of the film is Mr And Mrs Mahi. It stars Rajkummar Rao and Janhvi Kapoor in lead roles. Sharan Sharma, who directed Janhvi in the much-loved biopic, Gunjan Saxena – The Kargil Girl (2020), will be helming this film.”

According to rumours, Rajkummar Rao and Janhvi Kapoor would play cricketers in this exciting storey. “That also explains the cricket bat emoji in Dharma’s earlier-in-the-day tweet,” our insider said. Furthermore, it has been stated that once the actors are free of their other responsibilities, they will train in the sport. On October 7, 2022, the film will be released.