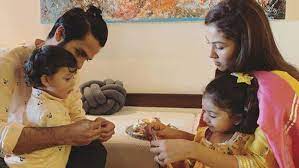 Mira Rajput is an avid user of social media. Mira Kapoor, Shahid Kapoor’s wife, may not be from the entertainment industry, but she is always in the spotlight. The young mother of two is well-known on social media and has a sizable following. She occasionally gives her fans peeks into her life with her family, including photoshoots, silly reels, vacation photographs, and more. Continuing on this path, Mira uploaded a photo from her PTA meeting for Misha and Zain on Instagram a few hours ago. Have you had a chance to watch it yet?

Mira Rajput used Instagram’s story function earlier tonight to share a fresh snapshot of herself dressed in exquisite ethnic clothing. She is wearing a multicoloured patterned kurta and pyjama in the shot as she visits her children’s school, Misha and Zain. Her hair was left down, and she went for a fresh, radiant appearance with a light and minimum makeup approach. With a pair of gorgeous shoes, the celebrity wife completed her desi style. She posed for a candid photograph in front of a painting, smiling at the camera. Mira captioned this shot when she shared it on Instagram: “POV in the middle of a 7-day Panchkarma detox but had to attend a PTA.”

For the uninitiated, Shahid and Mira Rajput married in 2015. Misha, their first child, was born in 2016. Their son Zain was born two years later, in 2018.

Mira Rajput and Shahid recently attended Karan Johar’s 50th birthday party, which was attended by a star-studded crowd. In a black and silver strapless gown, she looked simply stunning. In his white tuxedo, Shahid, on the other hand, looked like a handsome gentleman. Their photos together went viral as soon as they were posted on social media.