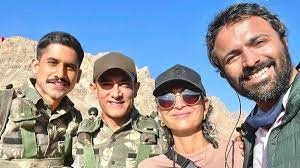 Laal Singh Chaddha, starring Aamir Khan and Kareena Kapoor Khan, is arguably one of the most eagerly anticipated films in recent memory. The movie’s trailer was just released, and it drew a lot of positive feedback from fans and celebrities alike. For the uninitiated, the Advait Chandan directed film will mark Telugu star Naga Chaitanya’s Bollywood debut, in which he will play a pivotal part. In the midst of all, a video of the Premam actor from a previous interview has leaked on social media.

Naga Chaitanya was questioned about his experience working with Aamir Khan in Laal Singh Chaddha in an interview with prominent film critic Baradwaj Rangan on Film Companion South last year. Chay said that in 45 days, he had learnt more from Aamir Khan than he has in the previous 12 years of his profession. “One thing is for sure that, what I have learnt in last 12 years, I learnt from that man in 45 days. He has taught me more than that. He’s got this amazing magic that he can rub off, he can influence people like that. He’s not doing that on purpose, it’s just the amount of knowledge he has, the human being that he is. He is such a lovely person.” the actor said.

Naga Chaitanya went on to explain that Aamir Khan is always pursuing content and that he is dedicated to movies. “At first, he is an actor, but he is in-tuned with craft as much as he is with his acting, and that’s amazing. He is always chasing content. He always talks about content first. He doesn’t talk about (box office) numbers or packaging. All that comes in the end, but as they’re filming, and till they finish filming, he is only chasing the content, and he’s been true to that,” the actor expressed.

During the IPL 2022 Finals, Aamir Khan debuted the teaser for Laal Singh Chaddha. The Hindi version of the cult Hollywood film Forrest Gump, starring Tom Hanks, is directed by Advait Chandan. After a long wait due to a variety of factors, the picture will eventually be released on August 11th, 2022.

NEW images from Karan Johar’s birthday celebration with Ranveer Singh, Tabu, and Abhishek Bachchan have been released by Farah Khan