Bollywood Society » Kartik Aaryan, Tabu, Bhushan Kumar, and the rest of the cast and crew of Bhool Bhulaiyaa 2 celebrate the success
Bollywood

Kartik Aaryan, Tabu, Bhushan Kumar, and the rest of the cast and crew of Bhool Bhulaiyaa 2 celebrate the success 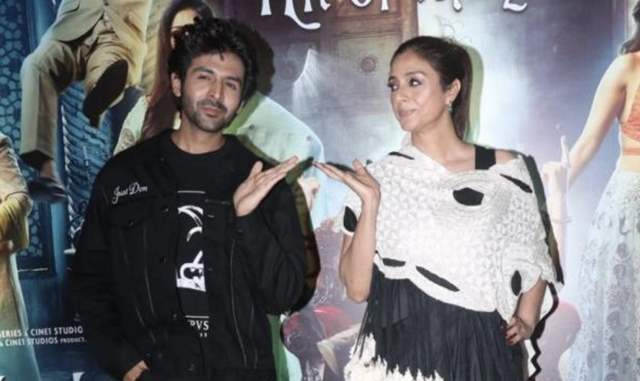 After the success of Bhool Bhulaiyaa 2, Kartik Aaryan and Kiara Advani are a force to be reckoned with.

As everyone knows, Anees Bazmee’s Bhool Bhulaiyaa 2, starring Kartik Aaryan, Kiara Advani, and Tabu, has been a huge box office success. On its second Saturday, the picture surpassed the key Rs. 100 crore nett barrier, and it is now on its way to the Rs. 150 crore mark. Last night, the team organised a celebration party in Bastian, Worli, Mumbai, to commemorate the film’s success. Anees Bazmee, Kartik Aaryan, Tabu, Rajpal Yadav, Sanjay Mishra, Bhushan Kumar, Murad Khetani, Sajid Khan, Mukesh Bhatt, and Ronit Roy were among those who attended the victory celebration.

In his black jacket, Kartik Aaryan looked really smart and gorgeous. He snapped a photo with Tabu, who looked stunning in her designer patterned white gown. Anees Bazmee, looking pleased and calm in his casual blacks, looked as fit as ever. In his leather jacket, Bhushan Kumar too looked elegant. The shirt and lungi style was perfected by Sanjay Mishra. Rajpal Yadav, on the other hand, opted to dress in his black striped formals. Sajid Khan looked stunning in his blue checkered shirt. Mukesh Bhatt was dressed in a patterned shirt.

Ronit Roy was dressed elegantly in a grey jacket. Murad Khetani looked like a million bucks in an off-white sweatshirt. With his fashionable patterned brown trousers, Sajid Nadiadwala drew a lot of attention. Due to professional constraints, Kiara Advani was unable to attend the event, although it would have been wonderful if she had been there to celebrate the success of Bhool Bhulaiyaa 2.

Kartik Aaryan is riding high on the success of Bhool Bhulaiyaa 2 and is weighing his choices carefully. Captain India, Shehzada, Freddy, and an unnamed love saga starring Kiara Advani, all helmed by Sameer Vidwans, are among the films he has in the works for release in the coming years. Kiara Advani is preparing for her next film, JugJugg Jeeyo, which will be released on June 24, 2022, and stars Varun Dhawan, Anil Kapoor, and Neetu Singh and is produced by Karan Johar’s Dharma Productions.

NEW images from Karan Johar’s birthday celebration with Ranveer Singh, Tabu, and Abhishek Bachchan have been released by Farah Khan

KK, the legendary musician has died, now survived by his wife Jyothy and two children