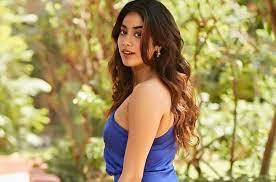 Janhvi Kapoor is an actress who never fails to demonstrate her affection for her family and friends. The Kargil Girl actress is quite active on social media, and she is frequently seen cheering up for her sisters Khushi Kapoor and Anshula Kapoor, as well as her brother Arjun Kapoor and cousins. Janhvi made news today for a different reason: she left a kind remark on papa Boney Kapoor’s flashback photo that he posted on his Instagram account.

The filmmaker, who is well-known for his social media activity, surprised followers with a throwback photo from 1995. Boney was wearing a brown and blue checkered shirt in the portrait, which was taken by late fashion photographer Gautam Rajadhyaksha. He wrote in the caption, “1995 Gautam Rajadhyaksha clicked this picture in natural light & still made me look better. Truly a magician”. Taking to the comment section, Janhvi wrote, “Papa you’re the most handsome you don’t need any light!!!!!” Khushi and Arjun, on the other hand, appreciated Boney Kapoor’s post.

Meanwhile, on the job front, Janhvi and Boney have teamed up for the latter’s next film Mili, which is a remake of the Malayalam classic Mili. Sunny Kaushal will also star in the film, which will be his first collaboration with Janhvi.

Janhvi is also now working on Nitesh Tiwari’s forthcoming directorial Bawaal, which also stars Varun Dhawan. The film will be released on April 7 of next year.

Janhvi recently finished filming Sidharth Sengupta’s grim comedy Good Luck Jerry. In announcing the film’s completion, the actress wrote, “I can’t believe it’s a film wrap. So many things have happened, changed, evolved, been learnt and unlearnt during the course of and because of this shoot. But through all of it I used to be so excited to come to set and see all these faces and trouble them and laugh with them and work tirelessly and unitedly to create something that was exciting all of us. I’ll miss all of you – is a massive understatement. And thank you for everything”.

Also Read: Janhvi Kapoor looks stunning in a lace gown as she stares intently into the camera

Kiara Advani recounts her difficult times: I got...

Most comedic remarks and punchlines, according to Kiara...