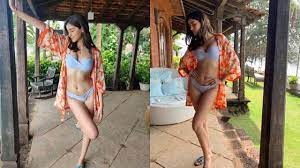 Ananya Panday’s recent images on her Instagram account have taken the internet by storm. The actress from Student of the Year 2 has only a few films under her belt. She has, nonetheless, established herself as one of the most popular newcomers in the entertainment sector. Ananya Panday has a sizable following on social media, where she maintains a consistent presence. She frequently posts breathtaking photos and videos on Instagram, and her followers drool over her and keep returning for more. Continuing on this path, Ananya posted a few of photos in a bikini a while back.

Ananya Panday took to Instagram to share a few photos from when she was filming Gehraiyaan with Shakun Batra. She’s wearing a stunning powder blue bikini with an orange and white floral shrug. Her shoulder-length hair was left open, and she wore no make-up. Ananya described the image she shared with these photos, “when continuity pictures aren’t so bad (tongue out emoji) throwback to Gehraiyaan dayzzz (wave emoji) (yellow heart emoji)”.

Ananya’s post was overwhelmed with likes and comments as soon as she posted these photographs. Suhana Khan and Shanaya Kapoor, among others, expressed their admiration for her. Suhana wrote, “Oh wowwww”. Shanaya’s comment read, “(heart eye emoji) anne”.

Rakul Preet Singh describes herself as a “very hungry actor” before of the premiere of Runway 34.