How many movies actor Rishi Kapoor and Amitabh Bachchan act? 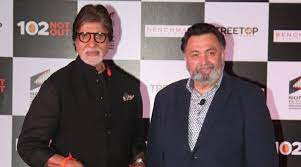 “It’s a tiny industry,” B-town is often heard stating, and that it’s. Actors can transform enemies into friends and heal relationships within a matter of years. They occasionally collaborate year after year, while some other times it takes years to see them collaborate. Amitabh Bachchan as well as Rishi Kapoor, two of Bollywood’s greatest performers, have experienced something similar. There was a time when these two performers appeared in nearly every other picture. However, as time went on, the number of movies they worked on together dwindled. After 27 years, they’re getting ready to reunite in their forthcoming project ‘102 Not Out.’

Here, we look at films starring performers that are a must-see for their fans.

Our memories of the characters Akbar and Anthony are still fresh. In this Manmohan Desai movie, Amitabh Bachchan and Rishi Kapoor were siblings who were separated as children and adopted by families of different faiths. The film’s religious theme clicked with the Indian public, and thanks to its execution and star-studded ensemble, it became one of Bollywood’s cult classics. There is also a song in the film that features Big B and Rishi Kapoor.

The movie fared well from the box office and was also the highest-grossing Bollywood picture in India in 1977.

Rishi Kapoor as well as Amitabh Bachchan reunited in Manmohan Desai’s ‘Coolie’ after the success of multi-starrer movies like ‘Amar Akbar Anthony’ and ‘Naseeb.’ Rishi Kapoor appeared in the film as a supporting character with Big B. Though there were instances when their connection was strained, the ice between the two performers was broken on the sets of ‘Amar Akbar Anthony.’ Rishi Kapoor was also allegedly spotted comforting Big B after the latter got hurt while filming an action sequence for ‘Coolie.’

Another movie in which Rishi as well as Amitabh worked together was Yash Chopra’s ‘Kabhie Kabhie.’ Despite the fact that they didn’t have much screen time together, they were all in the same movie. For the uninitiated, Rishi Kapoor was adamant about not filming the movie, although he was Yash Chopra’s sole choice for the role of ‘Vicky.’ Rishi Kapoor had to finish his shot in two days due to other obligations. Yash Chopra’s ‘Kabhi Kabhie’ was indeed the film that first brought the two legends together. Big B and Rishi Kapoor’s connection grew so deep that they are still spotted enjoying the movie’ success on social media years later. They just commemorated the 40th anniversary of ‘Kabhie Kabhie.’

Also Read: In which movie did Amitabh Bachchan and Farhan Akhtar act?

In which movie did Amitabh Bachchan and Farhan Akhtar act?