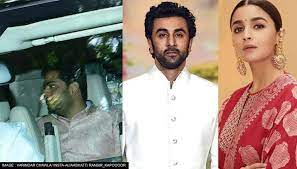 Alia Bhatt and Ranbir Kapoor are getting married today. After a lengthy wait, two of Bollywood’s top actors are finally marrying. The preparations began a few days ago, and the couple’s pre-wedding festivities began the day before yesterday. A large number of family members have been sighted coming to RK’s house, including Neetu Kapoor and Riddhima Kapoor Sahni, as well as Kareena Kapoor, Karisma Kapoor, Mahesh Bhatt, Soni Razdan, and others. The Ambanis Akash and Shloka are the most recent visitors.

We can see Akash Ambani and Shloka Mehta sat in the rear of their car as they arrived in luxury in the photographs. Whatever is visible in the photos, we can see Akash sitting next Shloka in a baby pink-colored outfit. The Ambanis come with a large security detail and immediately attract everyone’s attention. For the uninitiated, the Ambanis are good friends with the Kapoor family, so it’s no surprise that they attended Ranbir Kapoor and Alia Bhatt’s wedding.

Meanwhile, the Ladkewalas, which included Neetu Kapoor, Riddhima Kapoor Sahni, Kareena Kapoor Khan, Karisma Kapoor, Saif Ali Khan, and others, came at Ranbir Kapoor’s residence looking their finest. Soni Razdan, Shaheen Bhatt, Mahesh Bhatt, and Pooja Bhatt were among the ladkiwales who attended the wedding. According to reports, Ranbir Kapoor and Alia Bhatt will have an intimate vow ceremony before their pheras.

Also Read: Rishi Kapoor would have made everyone crazy’ during Ranbir Kapoor and Alia Bhatt’s wedding, according to Shakti Kapoor

During the filming of Dhoom, Abhishek Bachchan admits that ‘John Abraham taught’ him how to ride a bike