Bollywood Society » Madhavi Gogate actor from Anupamaa, died at 58 due to covid-19
TV

Madhavi Gogate actor from Anupamaa, died at 58 due to covid-19 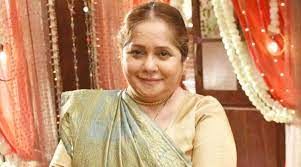 Madhavi Gogate, who played Rupali Ganguly, aka Anupamaa’s mother, inside the hit TV drama Anupamaa, had died at the age of 58. According to sources, the actress recently tested positive for Covid-19.

The experienced actress was also said to have been brought towards the hospital and then was suffering from such a Covid infection. However, her health deteriorated, as well as she died on November 21 in the afternoon. Rupali Ganguly, Madhavi’s previous co-star, posted on his social media account, saying, “So much left unsaid. Sadgati Madhaviji.”

Rupali also re-posted several of the Anupamaa images alongside Madhavi, which were posted publicly by fans.

Inside a social media post, TV actress Nilu Kohli too expressed her sorrow over the renowned actor’s death, stating, “Madhavi Gogate my dear friend nooooo. I can’t get down to believing that you have left us. Heartbroken @gogatemadhavi you were too young to go. Damn Covid. I wish I had picked up that damn phone and spoken to you when you did not reply to my msg. All I can do is regret now (sic).”

Madhavi died in Mumbai’s Seven Hills Hospital. She has appeared in a number of films and television series. Her breakthrough came in the Marathi film Ghanchakkar, in which she starred alongside Ashok Saraf. According to a newspaper, her most famous pieces were Bhramacha Bhopala and Gela Madhav Kunikade. Tuza Maza Jamtay was her first Marathi television appearance. Madhavi too has appeared in a number of Hindi television programmes, including Koi Apna Sa, Aisa Kabhi Socha Na Tha, and Kahin Toh Hoga.

Delhi Sikh Gurdwara has filed a complaint about...

All Carnival properties will no longer show Akshay...

Sutliyan, a warm and cuddly family drama, is...

Husband Sam Bombay is been detained for beating...