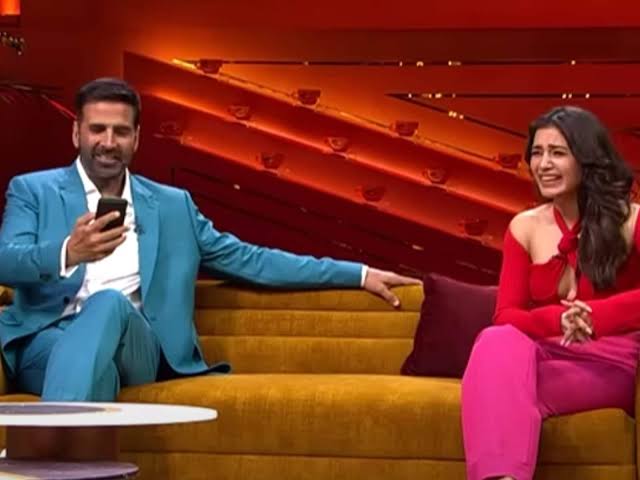 Samantha made her debut this year while Akshay Kumar returned to Koffee Couch.

Samantha Prabhu and Akshay Kumar graced the third episode of Koffee with Karan Season 7 as guests. This episode was a giggle riot, from Samantha’s candid assessment of how KJo has destroyed marriages to Akshay’s sharp retort to the Chris Rock and Will Smith incident. The two actors discussed their individual experiences in the film industry and shared some details about their personal lives during the programme. As the programme came to an end, viewers commented on social media.

A fan tweeted, “One of the Best Episode of #KoffeeWithKaran ever ! #AkshayKumar is Terrific & #SamanthaPrabhu I Just LOVE THIS WOMAN ! ! #KoffeeWithKaranS7”. Another user tweeted, “The episode with Akki and Samantha was easily the most entertaining and they do share quite a great chemistry…Akki and Sam at their best, answering the questions in some style and the dance round at the end…Loved it”. Similar tweets flooded in social media.

In terms of Samantha Ruth Prabhu, she is collaborating with Vijay Deverakonda on Kushi in addition to a project that Nayanthara is funding. With Rocky Aur Rani Ki Prem Kahani, which stars Alia Bhatt, Ranveer Singh, Jaya Bachchan, Shabana Azmi, and Dharmendra, Karan Johar makes his directorial comeback.

Shamshera Movie Review: The intensity of Ranbir Kapoor and the devilishness of Sanjay Dutt work together