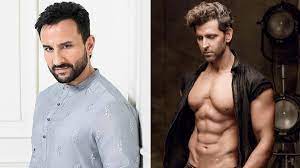 Actor Saif Ali Khan arrived in Lucknow lately to begin filming for his forthcoming action movie Vikram Vedha. The Nawaab plays a cop inside the movie, which would be a remake of the 2017 Tamil film adaptation (Vikram).

The movie is directed by Pushkar-Gayathri, who also directed the original. Now that Saif Ali Khan has arrived in Lucknow, he is throwing in significant effort and hard work to prepare for his cop role. According to a source, “This week, Saif Ali Khan kicked off his schedule for Vikram Vedha in Lucknow. Playing the role of an encounter cop in the film, Sif has been hard at work with his tough shooting schedule!”

With the remake of Vikram Vedha, the actor is likely to dazzle the audience with such a thrilling performance. Inside the movie, Saif Ali Khan plays Vikram, a cop who is motivated to apprehend a mobster (Vedha), played by Hrithik Roshan. The plot then shifts to Vedha narrating stories to the officer, which alters the cop’s sense of good and evil.

The movie release date has been set for September 30, 2022, according to the producers. The original Tamil film’s directors, Pushkar-Gayathri, are also returning to direct this one. This much-anticipated production is backed by Reliance Entertainment, T-Series, as well as Chennai-based YNOT Studios. This year, Roshan began filming for his Dussehra segment, which he also posted on social media.

Also Read: Hrithik Roshan feels that web is changing the ‘set mould of a superstar’

Who is Anthony Hopkins?