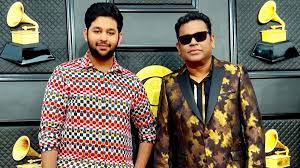 AR Rahman, a musician, was one of several Asians who attended the Grammys this year. This year’s Grammy Awards, dubbed Grammys 2022, were hosted in the MGM Grand Garden Arena in Las Vegas. The greatest personalities in the industry showed up and walked the red carpet in their most spectacular attire. This year’s host, Trevor Noah, is also back.

AR Rahman said on Twitter that he will be attending the awards show, and that he would be accompanied by his son AR Ameen. For the first time, the Academy Award-winning artist brought his son to the event and shared the exciting news with his followers. on the internet

Rahman took a photo with his kid Ameen and tagged it “Grammys” with a heart emoji. AR Ameen, who is also a rising musician, even joined his father on the red carpet. AR Rahman also posted a picture from the red carpet with the phrase “Parenting.”

After Gehraiyaan, Ananya Panday yearns for a “feeling of neutrality” and seeks for honest roles

In recent images, Sonam Kapoor wears an ivory drape to show off her baby bulge