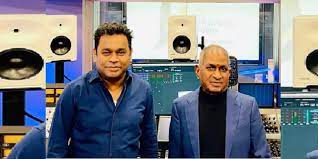 Thousands of music enthusiasts are ecstatic that maestro Isaignani Ilaiyaraaja visited Oscar winner A.R. Rahman’s Dubai studio. AR Rahman, who shared a photo of himself with Ilaiyaraaja on Instagram, captioned, “Such a pleasure welcoming the Maestro to our Firdaus studio…Hope he composes something amazing for the Firdaus orchestra to play in future!”

Fans of good music all across the world regard both music directors as legends. AR Rahman began his career as a keyboard player for Ilaiyaraaja before becoming a music director.

The photo of Rahman and Ilaiyaraaja wowed not only fans but also a number of prominent actors and singers, who expressed their delight.

Some of the individuals who commented on the photo of the luminaries together were actress Shraddha Srinath, rapper Blaaze, music producer Meghdeep Bose, and vocalist Hariharan.

Ananya Panday, dressed in a black crop top, smiles and poses with fans