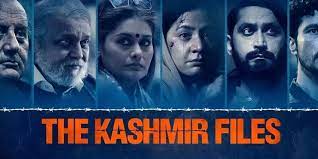 Producers Abhishek Agarwal Arts and I Am Buddha Productions are regrouping to portray two more brutally honest tales of humanity on the big screen, following the historic triumph of ‘The Kashmir Files.’

The ‘Kashmir Files’ team has issued an announcement regarding their planned projects on the occasion of Abhishek Agarwal’s birthday.

The two films, which will be part of the ‘The Kashmir Files’ trilogy, will be produced by Abhishek Agarwal, Vivek Ranjan Agnihotri, and Pallavi Joshi, with Tej Narayan Agarwal presenting them.

‘The Kashmir Files,’ a heartbreaking depiction of the plight of Kashmiri Pandits in 1990, just joined the Rs 250 crore club, piquing interest in the team’s next project.

With the huge success of ‘The Kashmir Files,’ which became the talk of the country following its publication, the producers will soon reveal additional details about the next stories about the dark and untold facts of Indian history.

The film was created on a tight budget of Rs 15 crore, with an extra Rs 10 crore spent on print and promotion, bringing the total cost to Rs 25 crore. In comparison, they have already generated Rs 135 crore in income from theatrical and non-theatrical mediums, resulting in a staggering 440 per cent return on investment. The films average occupancy for evening and night concerts across the belt is 51 per cent, with spot bookings bringing it closer to 70 per cent. The Kashmir Files’ nett total in advance for the evening and night performances is 2.30 crore, and these shows alone will bring in a nett amount closer to 4 crore.

This brings the movie’s total to Rs 219 crore after 16 days, and the picture will be aiming for double digits on its third Sunday.