Bollywood Society » Kalank: All you should know about this Bollywood period drama movie
Movies

Kalank: All you should know about this Bollywood period drama movie 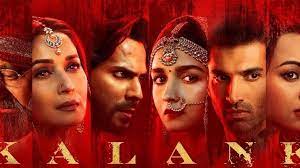 The Kalank movie’s principal filming started in April 2018, and it has been released on April 17, 2019, in 5,300 theatres throughout the world, making it the largest Bollywood release of 2019. The movie earned a total of 146.31 crores. The picture, nevertheless, garnered poor reviews but was a box office flop.

Satya Chaudhry (Sonakshi Sinha) is diagnosed with cancer as well as told that she would die shortly. She returns to her native Rajputana hamlet and asks Roop (Alia Bhatt), a childhood friend, to offer company for her husband, Dev Chaudhry (Aditya Roy Kapoor), who owns a liberal newspaper.

Roop continues to refuse Satya’s request, but is eventually persuaded by her father, Dharampal (Pawan Chopra), and agrees on the condition that she marries Dev, which Satya accepts. Dev tells Roop that he still loves Satya and that their relationship would remain polite and platonic after they are married. Roop, who is depressed, finds consolation in singing, which she learns from the madam of a brothel, Bahaar Begum (Madhuri Dixit). She also starts working in her husband’s publishing business, where she can put her degree to good use. Roop displays an interest in writing about the state of the neighbourhood where the brothel is located, and she meets Zafar, a womanising blacksmith.

By wooing Roop, who is married to Balraj’s legitimate son, Dev, Zafar intends to wreak vengeance on his Kalank parents, Bahaar Begum and Balraj Chaudhry (Sanjay Dutt), who abandoned Zafar after terminating his adulterous romance with Bahaar. Zafar’s intentions are misunderstood by Roop, and he falls in love with him. Satya is both happy and sad as she begins to build a friendship with Dev. Satya dies after pleading with Dev to forgive Balraj and give Roop a chance. In yet another attempt to embarrass Balraj, Zafar incites communal hate in his buddy Abdul Khan (Kunal Khemu) by calling for India to be partitioned along religious lines, that Balraj and Dev oppose.

Balraj confronts Bahaar and Zafar after learning of Roop and Zafar’s romance. Bahaar, who doesn’t agree with Zafar’s strategy, cautions Roop and reveals Zafar’s true objectives. Roop consummates her marriage to Dev despite her heartbreak, insisting that she would never be able to love him. As Abdul’s political attitude gains traction, riots against Hindus and Sikhs erupt in the city, prompting the Chaudhrys to leave to Amritsar with the help of Zafar, but not before the kind maid Saroj (Achint Kaur) is cruelly stabbed to death. Despite his initial intentions, Zafar admits to Roop that he finally fell in love with her.

Zafar is stabbed in the stomach many times with such a dagger by Abdul while boarding a train, as Roop and Dev flee.

Aditya (Pavail Gulati), a journalist recording the partition, interviews Roop and Dev 10 years later about their experiences. Roop’s inner voice says that the colour of love and hatred is red, yet love is frequently stigmatised or blemished, and the narrative concludes with Roop remembering Zafar.

Also Read: Bhoomi (2017): All you need to know about this action drama movie

Bhoomi (2017): All you need to know about this action drama movie

Hero (1983): All you should know about this Blockbuster movie