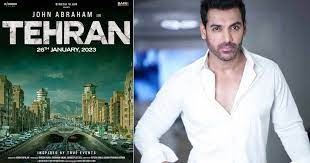 Maddock Films has produced blockbusters and content-rich movies like Badlapur, Stree, Bala, and Mimi, and it has never fails to amuse viewers including its diverse offers! Maddock Films has announced the release of Tehran, an action thriller featuring John Abraham as well as helmed by Arun Gopalan and written by Ritesh Shah and Ashish Prakash Verma. The movie is based on genuine events.

The official announcement was made on Tuesday as John Abraham wrote, “Get set for an action-packed Republic Day 2023. Thrilled to announce my next, #Tehran! Directed by #ArunGopalan, produced by #DineshVijan, @ShobhnaYadava, @LeyzellSandeep. Written by @writish & @ashishpverma.”

Next year, on January 26, 2023, the film Tehran will be released on Republic Day. The film is produced by Dinesh Vijan, Shobhna Yadav, as well as Sandeep Leyzell as well as being a Maddock Films production in partnership with Bake my Cake Films.

John Abraham was last seen with Divya Khosla Kumar in Satyameva Jayate 2. The movie was indeed a follow-up to the 2018 smash success of the very same name. On November 25, this was released in theatres. The movie, helmed by Milap Zaveri, starred Abraham in three roles as he battled corruption in Lucknow. T-Series and Emmay Entertainment produced the film, which was directed by Bhushan Kumar.

In addition, the actor is working on such an action picture called Attack, which also will hit theatres on April 1. The movie is based on a genuine incident of a hostage situation and therefore is written and directed by debutant director Lakshya Raj Anand. Abraham plays a lone ranger who leads an attack force during a counter-offensive in the film Attack.